For our meeting Monday June 10th we welcome Rear Admiral Cedric Pringle Commander, Expeditionary Strike Group 3 with the US Navy. 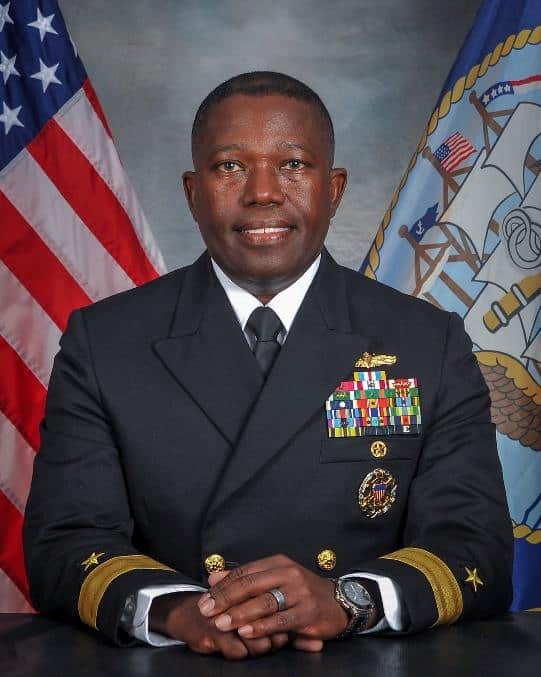 Rear Adm. Cedric Pringle graduated from the University of South Carolina in December 1986 with a Bachelor of Science in Economics and received his commission through Naval ROTC. He also earned a Master of Science in Financial Management from the Naval Postgraduate School in 1998 and a Master of Arts in National Security Strategy from the Naval War College in 2003.
At sea, he served in engineering department on USS Ranger (CV 61) and USS Portland (LSD 37) and as executive officer on USS Fort McHenry (LSD 43). In July 2004, he assumed command of USS Whidbey Island (LSD 41). During his tour, he participated in humanitarian assistance and disaster relief operations in response to Hurricane Katrina in September 2005. In February 2012, he took command of the Navy’s first hybrid propulsion drive ship, USS Makin Island (LHD 8). During his tenure, Makin Island completed its maiden deployment and achieved numerous successes, including earning the Battle “E” Award, the Retention Excellence Award, Afloat and Aviation Operational Safety Awards and the President’s Volunteer Service Award for community outreach.
Ashore, he served on the staffs of Navy Recruiting Area 3, Amphibious Squadron (PHIBRON) 4 as chief staff officer, Amphibious Force U.S. 7th Fleet as deputy chief of staff for Operations and Plans (N3/N5), on the Joint Staff as the deputy chief of Forces Division in the Force Structure, Resources and Assessment Directorate (J8), and as director, Navy Senate Liaison for the Secretary of the Navy’s Office of Legislative Affairs. From September 2015 to November 2017 he served as deputy director of Joint Interagency Task Force South. During this tour, he also served as commander, Joint Task Force Matthew, leading relief and recovery efforts in Haiti following Hurricane Matthew in October 2016.

In December 2017, he assumed duties as commander, Expeditionary Strike Group 3.