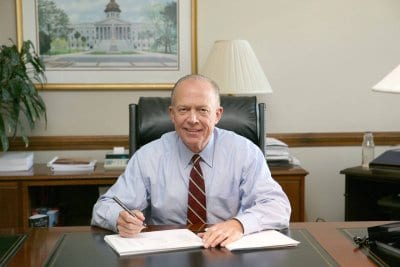 Richard Eckstrom, a CPA, has served as South Carolina’s Comptroller General since 2003. As the State’s Chief Accountant, he has championed fiscal restraint, accountability and transparency in all government financial transactions.

From 1994 to 1998, Eckstrom served as State Treasurer. Eckstrom is the first CPA to have held each of the financial positions of State Treasurer and Comptroller General. Prior to being elected Treasurer, he was a practicing CPA with an international accounting firm.

Eckstrom is a graduate of the University of South Carolina. Following his graduation in 1970, he was commissioned in the Navy and conducted Oceanographic Research for three years. Upon completion of military service, he earned an MBA and a Master of Accountancy from the University Of South Carolina School Of Business. While a graduate student he also joined the Navy Reserve, retiring as a Captain in 1995.

In 2004 Eckstrom accepted a commission in the S.C. State Guard. In 2011 he became its commanding general and served in that role until retiring in 2014 at the rank of Major General.