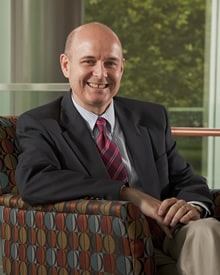 Dr. William T. (Tom) Bogart serves as the 20th president of Columbia College. Dr. Bogart joined Columbia College after a 10-year presidency at Maryville College, in Maryville Tennessee. An accomplished academician, Bogart earned his undergraduate degree from Rice University and Master’s and Doctorate degrees in Economics from Princeton University. He has been an effective, innovative and collaborative higher education leader for 30 years.

Bogart’s academic career began in 1990 at Case Western Reserve University in the Weatherhead School of Management, where he served on the faculty through 2002. From 2002 – 2010 Bogart served as Dean of Academic Affairs at York College in Pennsylvania.

Throughout his career he has received numerous teaching awards and honors, and written various articles and publications in the field of economics, with special focus on urban economic development, the impact of school quality and public policy on housing markets, and evolving metropolitan structure. Dr. Bogart combines innovation, research, and effective management with a commitment to transparency, respect for faculty and staff, and a compassionate dedication to students.

Tom is married to Mary Bogart, a professional writing tutor in the writing center at Pellissippi State Community College. She has taught English at the college, high school, and middle school levels. Mary earned a bachelor’s degree in English with teaching certification from Baldwin-Wallace University and a master’s degree in English (creative writing concentration) from Cleveland State University. They have one daughter, Beth, who is an engineer at the Laboratory for Laser Energetics of the University of Rochester in Rochester, NY.