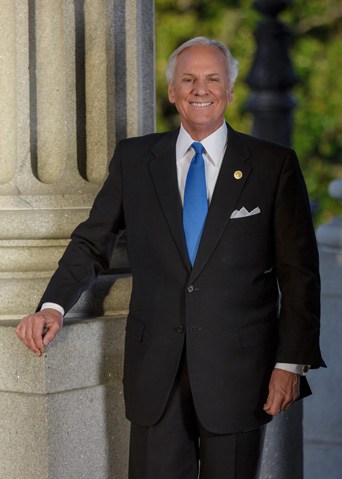 Henry Dargan McMaster of Columbia became the 117th Governor of South Carolina on January 24, 2017 and was elected to his first full term as governor on November 6, 2018.

McMaster was the first U.S. attorney appointed by President Ronald Reagan, and was unanimously confirmed by the United States Senate. His “Operation Jackpot” investigation into international drug smuggling produced over 100 convictions.

As attorney general, McMaster made prosecution of criminal domestic violence a priority and harnessed the resources of law enforcement and prosecutors to crack down on child Internet predators. He extended the state grand jury’s jurisdiction to environmental and gang crimes and broadened its authority to include securities crimes following the collapse of Carolina Investors and Home Gold, convicting those responsible.

In 2003, McMaster issued a landmark opinion to protect our marsh islands from encroachment and later won the Life Sciences Act case in the South Carolina Supreme Court, which enhanced the state’s economic potential through its universities for research, development and investment in the knowledge-based economy. The governor was central to the fight against “Obamacare,” organizing and leading the states in their challenge against the law’s unconstitutional federal encroachment.

As lieutenant governor, McMaster served as president of the South Carolina State Senate and headed the Lieutenant Governor’s Office on Aging, which aids older adults with social, economic and health needs. In that capacity, he added senior services to the 2-1-1 system, connecting callers with support groups and services in their areas. He also established a “Senior Day” at the State House and strengthened the network of “senior ride” projects. AARP named McMaster a “Capitol Caregiver” for his policies to help seniors live independently at home.

McMaster was chairman of the South Carolina Republican Party from 1993-2002, winning reelection three times. As state GOP chairman, he led the party to Republican majorities in South Carolina’s House and Senate. Governor McMaster has served on the South Carolina Ports Authority Board of Directors, the South Carolina Commission on Higher Education, the Palmetto Health Foundation Board and the South Carolina Policy Council (as chairman).  He is admitted to practice in all courts, state and federal, in South Carolina, as well as the U.S. Court of Claims (1974), the U.S. Court of Appeals for the Fourth Circuit (1975) and the Supreme Court of the United States (1978). Governor McMaster is a recipient of the Order of the Palmetto, the highest civilian honor in the state, and was named “Public Servant of the Year” by the Sierra Club and “National Law Enforcement Officer of the Year” by The Humane Society of the United States.

Governor McMaster is married to Peggy McMaster, and they have two children, Henry D. McMaster, Jr. and Mary Rogers McMaster. They are members of First Presbyterian Church of Columbia.