Please Join Us For Lunch! 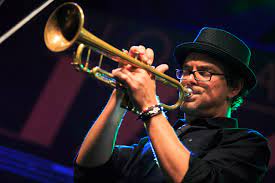 Trumpeter, composer, arranger and bandleader Mark Rapp is the founder of ColaJazz.com, a jazz initiative to grow and support jazz in and around Columbia, SC through events, education, recordings, and advocacy. In 2019, ColaJazz was 1 of 15 jazz organizations in the country chosen to beta-test the new Jazz at Lincoln Center After-School Content. ColaJazz brings jazz to the Children Hospital, retirement communities, schools and communities in need. In partnership with the Koger Center, Rapp presented a “Jazz for Young People” concert to 700 kids in the Boys & Girls Clubs and shortly after, Rapp presented a “SC Jazz Culture” concert for 2000 Richland One 3rd graders. He is also the co-creator and Artistic Director of the “Live in the Lobby: Koger Jazz” series.

Rapp has released 8 diverse recordings and appears as a sideman on a myriad of projects including Disney’s “Everybody Wants to be a Cat” alongside Roy Hargrove, Dave Brubeck, Esperanza Spalding, The Bad Plus, Joshua Redman and more. Rapp’s celebrated 2009 debut release “Token Tales” earned him a spot as a “Top Emerging Trumpeter” in Downbeat Magazine, sold out the Blue Note (NYC) and debuted at the famed Newport Jazz Festival. Rapp is a featured artist in Mellen Press’ “How Jazz Trumpeters Understand Their Music” among a prestigious list including Terence Blanchard, Lew Soloff, Freddie Hubbard, Tim Hagans, Dave Douglas and more. Rapp also composed and produced a jazz ballet “Woven: Life in Notes and Steps” (wovenballet.com). He has performed in jazz clubs and festivals around the world from Croatia, Brasil, Austria, Switzerland and USA including back-to-back appearances at the 2017 & 2018 New Orleans Jazz and Heritage Festival.

Mark has maintained a teaching studio throughout his travels. He has given master classes in University settings and has led and coached the United Nation’s World Music Project in Geneva, Switzerland. Mark was a guest lecturer for the Jazz Education Network Conference (Atlanta, Jan 2013), presenting the “Musical Mind: From Spirit to Song.” He is a passionate educator and performing artist and currently teaches privately through Freeway Music