For our meeting Monday May 24th 2021, we welcome Ed McMullen, Former Ambassador of the United States to Switzerland and Liechtenstein. 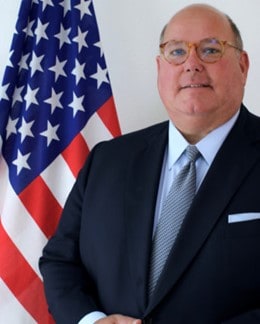 Ed served as Ambassador of the United States to Switzerland and Liechtenstein from November 2017–January 2021. He has been recognized for developing the strongest bilateral relationship with U.S./Swiss relations in history. During his service as Ambassador, Ed focused on FDI and met more than 300 CEOs and chairs of boards of directors throughout Switzerland and Liechtenstein, building relationships and a favorable environment for economic growth. Thanks to Ed’s leadership in this initiative, Switzerland moved from the eighth-largest to the sixth-largest foreign direct investor in the United States. He is a frequent guest of the World Economic Forum in Davos, Switzerland.

Following the completion of his public service, Ed is now a Senior Policy Advisor with Adams and Reese LLP, engaged in private equity as a partner in a London firm, serves on the board of a Paris-based communications firm, and serves on the North American boards of several Swiss companies while continuing to build his relationships among investors and corporate leadership in Switzerland, Liechtenstein, and throughout Europe.

Prior to his service as Ambassador, Ed worked in the public policy world as president of a state think tank and established early Washington D.C. contacts assisting the founding president of The Heritage Foundation during the Reagan Administration. Prior to his appointment as Ambassador, Ed founded and served as president of McMullen Public Affairs, a South Carolina-based corporate advertising and public relations firm that provided government affairs, grassroots campaigns, advertising, PR services, data analytics, and polling to a broad range of companies. Throughout his career, Ed’s clients have included several Fortune 25 companies and associations operating in the aerospace, high-tech, data analytics, pharmaceutical, finance, and biotech sectors.

Ed has served as a policy adviser in several national presidential campaigns, as well as statewide political campaigns in Virginia and South Carolina. Ed has raised funds and served as an advisor for the McCain, Romney, and Trump presidential campaigns and congressional leaders, including U.S. Senator Lindsey Graham.
Ed served on the South Carolina Commission on Higher Education, served two terms as Chairman of the South Carolina Endowed Chairs Research Centers Board, and was appointed by two Speakers of the House and Governor Beasley to serve on three different state taxation committees. He also served as a board member of the South Carolina Competitiveness Council and was a leader on the nuclear power subcommittee. Ed is a member of the Swiss American Foundation’s Board of Directors and serves as a Trustee of the Kennedy Center for the Performing Arts in Washington, D.C.

Ed was awarded The Order of the Palmetto, South Carolina’s highest honor, by Governor David Beasley. In addition to devoting time to his family and his work, Ed is an avid hunter and fly fisherman and enjoys playing tennis.