Please join us for lunch! 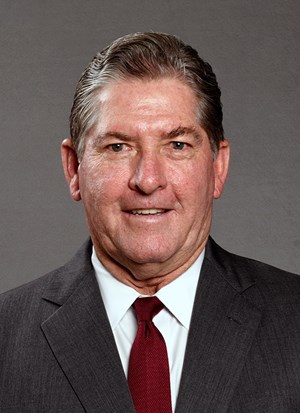 University of South Carolina Athletics Director Ray Tanner is in his 10th year guiding the Gamecocks’ athletics programs. After a long and highly successful career as Carolina’s baseball coach, Tanner officially began his new duties on Aug. 2, 2012. On April 29, 2019, Tanner was awarded a contract extension, keeping him in the AD’s chair until 2024.

Under Tanner’s watch, Gamecock student-athletes have achieved tremendous success in intercollegiate athletic competition, in the classroom and in the community.

Under Tanner’s watch, the Gamecocks have won two national championships (2014 equestrian, 2017 women’s basketball), 16 SEC regular season and tournament championships and have posted three of the top six finishes in the Learfield IMG College Directors’ Cup All-Sports Standings in school history, including a 21st-place finish in 2016-17.

Carolina has claimed the Certified SC Grown Palmetto Series, sponsored by the South Carolina Department of Agriculture, every year in which it’s been conducted. The series consists of athletic, community service and academic points in head-to-head matchups against Clemson.

In September 2014, Tanner spearheaded the development of “The Gamecock Student-Athlete Promise,” a document that showcases the depth and breadth of the commitments the South Carolina Athletics Department has made to its student-athletes. As part of the document, USC became the first school in the SEC to guarantee four-year scholarships for all qualifying sports. It also offers former student-athletes the opportunity to return to campus to complete their undergraduate degree as part of the “Gamecock Degree Completion Program.”

In fulfilling The Promise, the Gamecock athletics department launched “Beyond Sports,” a professional development and internship summer program for student-athletes, who wish to get “real world” experience in their field of study.

As part of giving Gamecock student-athletes a “championship experience” at USC, the commitment to develop the finest facilities in the nation continues.

The 2020 football season saw a $22.5 million renovation to Williams-Brice Stadium. The project included upgrades in premium seating for the East Side, West Side and South Lower as well as a new “2001 Club” which is next to the team entrance onto the field.

Tanner has negotiated contracts for Gamecock Athletics that have created additional exposure and revenue for the department. As part of a 10-year agreement with IMG, a new center-hung scoreboard and 360 degree LED ribbon board was added to Colonial Life Arena in 2018. South Carolina’s IMG marketing arrangement, finalized in 2016, was ranked as the seventh-largest in college athletics by the Portland Business Journal.

The Gamecocks have a 10-year contract with Under Armour as its official outfitter, which was signed in 2016. At that time, the contract was one of the 10 largest in college athletics, ranked by Forbes magazine.

During Tanner’s tenure, revenues and expenses for Gamecock athletics have increased more than 52 percent. While the costs of sustaining a major college athletics department is increasing, Tanner has balanced the ledger while continuing to build first-class facilities, recruiting and maintaining outstanding coaches and student-athletes and giving Gamecock student-athletes a “championship experience.”

Tanner recently served on the NCAA Division I Baseball Committee for four years and was its chair for two seasons.

A dedicated community leader whose charitable organization, The Ray Tanner Foundation, has made a difference in many South Carolina families, a three-time National Coach of the Year and Southeastern Conference Coach of the Year, Tanner completed 16 years as head coach at the University of South Carolina, establishing one of the premier programs in college baseball prior to being named AD. He led the Garnet & Black to two NCAA Division I Baseball Championships, a pair of national runner-up finishes, six College World Series appearances, three SEC championships, six SEC Eastern division titles, a SEC tournament crown and 13 consecutive NCAA Tournament appearances.

Tanner gained valuable experience at an international level in his association with USA Baseball. He served five stints with Red, White and Blue, including in 2003 as head coach for the USA National Baseball Team. He was named the U.S. National Coach of the Year for his work that season.