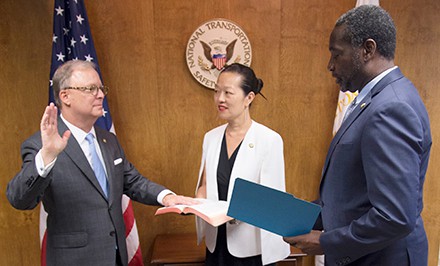 Robert L. Sumwalt was sworn in as the 14th chairman of the National Transportation Safety Board in August 2017, after being nominated by President Donald J. Trump and confirmed by the U.S. Senate. Mr. Sumwalt began his tenure at the NTSB in August 2006 when President George W. Bush appointed him to the Board and designated him as Vice Chairman of the Board. In November 2011, President Barack Obama reappointed Mr. Sumwalt to an additional five-year term as Board Member.

Since joining the Board, Chairman Sumwalt has been a fierce advocate for improving safety in all modes of transportation, including teen driver safety, impaired driving, distractions in transportation, and several aviation and rail safety initiatives.

Before joining the NTSB, Mr. Sumwalt was a pilot for 32 years, including 24 years with Piedmont Airlines and US Airways. He accumulated over 14,000 flight hours.