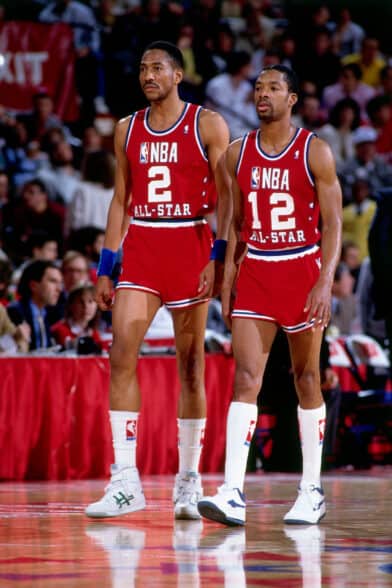 Alex English was the NBA’s most prolific scorer during the 1980s and retired as the seventh-leading scorer with 25,613 points. After being underutilized by the Milwaukee Bucks and the Indiana Pacers during his first four years in the league, English became the most explosive member of a high-powered Denver Nuggets team that consistently ranked among the league’s top-scoring clubs.

English dominated during the 1980s. During his 10 full seasons in Denver he played in eight straight All-Star Games, won a scoring title, averaged more than 23 points nine years in a row and led the Nuggets to nine consecutive postseason appearances (although never to the Finals). The sleek, 6-foot-7 forward became the first player ever to string together eight straight 2,000-point seasons. And he led the Nuggets in scoring seven times en route to becoming the franchise’s all-time top scorer.

The soft-spoken English let his on-court performances do the talking; he was never one to boast of his abilities or draw attention to his achievements. When he did speak, it was always with eloquence. In fact, English had three books of his poetry published. Also, during his playing days, English appeared in a sensitive role in the movie Amazing Grace and Chuck, a film about the threat of nuclear war that starred Gregory Peck and Jamie Lee Curtis.

While Julius Erving, Larry Bird and Magic Johnson garnered much of the attention during the era, English quietly assembled one of the most impressive playing records in NBA history.