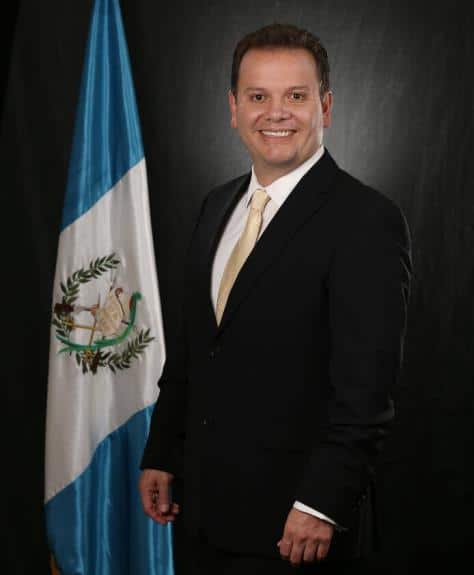 Manuel Espina served in his country’s foreign service, when he was appointed as Ambassador of Guatemala to the United States from 2017 to 2020. During this period, Manuel strengthened ties between both countries. Manuel is a renowned Guatemalan leader whose career has revolved around his passion for building a prosperous Guatemala.

He has focused his professional and organizational capacities to develop a platform that serves as connection between world leaders and Guatemala. Following this interest, seventeen years ago, he co-founded -with the support of a group of well-known Guatemalan leaders and professionals- an organization called Guatemala Próspera (Prosperous Guatemala), which he chairs.

Under his leadership, the organization Guatemala Próspera, has developed projects to benefit the country, such as, La Transformación está en mí (The Transformation is Within Me). Along with the global leadership guru, Dr. John C. Maxwell, more than 1 million people in Guatemala have been trained, without an economic cost, to rethink their conception of ethical and moral values. All of his work at Guatemala Próspera has been ad honorem. Embracing his relationships with political and business leaders in Washington, D.C., he has led and coordinated several summits with Guatemala’s noted political, business, religious, and media leaders. These meetings have generated meaningful projects and initiatives to benefit Guatemala. He has also organized many Leadership Summits with the participation of well-known international executives that have made a lasting impact in Guatemalan business managers ongoing education. Some of the companies to which these executives belong are: Walmart, Apple, FedEx, Cisco, ExxonMobil, LA Dodgers, Compaq, and GNC, among others. Seven years ago, Manuel Espina organized the implementation of Guatemala’s first “Día Nacional de Oración” (National Prayer Day), inspired by the National Prayer Breakfast -an event with sixty-seven years of tradition in the US- with the support of senators, representatives, and diplomats. His experience as a businessman is oriented to high-end fashion and luxury goods market, where he has represented world-class brands and developed many real estate projects.

Manuel Espina is married to Lisa and have two children: Anika and Juan Manuel. They live in McLean, Virginia with their cat, Cooper.